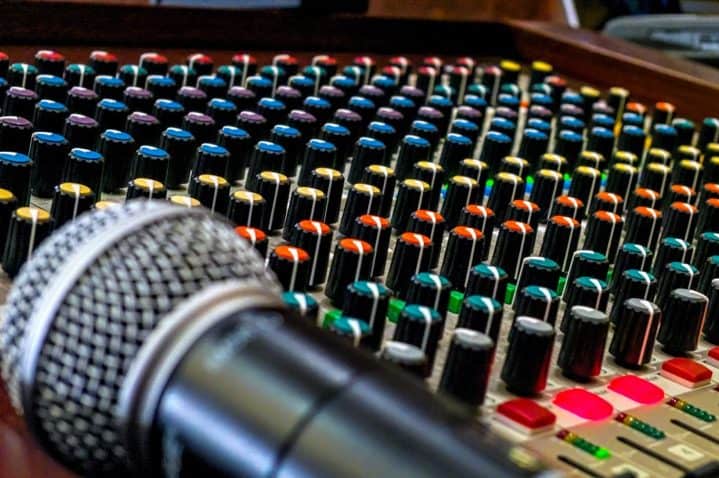 If you’re a beginner in podcasting then might not need either. You can simply start with a USB mic. But, if you’re a professional or you care deeply about high-quality sound from the start for your podcast, then consider getting an audio interface or mixer as part of your gear.

Though these two may seem similar, they’re actually different. One similarity between an audio interface and mixer is that both these devices work as the intermediary between the external sound devices and the computers. These recording devices are not only used for podcasting, but they’re also used for audio production on a professional level.

Our pick for the best audio interface is the Focusrite Scarlett 2i2 3rd Gen that allows for podcasting with two microphones. It’s great for your wallet and for those who are in the early stages of their podcast journeys.

Most podcasters find it difficult to choose between these two hardware devices as they don’t know all the similarities and differences between these two. That’s why we’re going to discuss the audio interface and mixer so that it’ll help you choose which one is right for you.

That’s usually the first question that pops up with audio interfaces. So let’s start there.

Audio interfaces have mic preamps built directly in the XLR inputs for mics. interfaces connect to a computer’s inputs via USB, FireWire, or PCI cable.

You’re probably now asking why and if you need an audio interface when your plug and play USB microphone connects and records straight into a computer. What’s the benefit of buying an XLR mic and an audio interface? Sound quality is better with XLR mics.

The audio interface records sound straight from external audio sources (your voice, instruments) and enhances the quality of the original sound before it sends the audio data to the computer. So, for better professional audio quality, you should use an audio interface.

Interfaces come in different shapes and sizes. Most interfaces are lightweight and compact in size, which makes them portable enough to carry wherever you want. On the other hand, most of the mixers are not portable because of their bulky sizes.

Like the audio interface, let’s first answer what a mixer. A mixer has multiple inputs, so if you want to record from multiple microphones and get them into your computer, the mixer is the way to go. It can record multiple audio signals and combine them, so you get each track on your computer.

A mixer gives you control over your XLR inputs with volume faders and equalizers that can be applied to each individual input directly. All while recording. It’s a great piece of audio equipment when you have multiple guests on your podcast. People usually talk at different levels, so it’s great when you’re able to adjust each mic’s inputs one by one.

These features will let you edit the audio even before your computer which will reduce work and time during the post-production process. Mixers also give you the ability to apply effects to the sound like a delay, chorus, and reverb while recording.

If you’re planning of doing a live podcast episode, you need a mixer. Without a mixer you can’t go live and it is also useful when you want to modify any specific sound from one specific source. On the other hand, you won’t’ find the live performance option in an audio interface.

Audio mixers are needed if you have content like music to record for your podcast which you can’t do professionally with an audio interface due to the lack of input and output.

Differences Between Interface and Mixer

You can see that audio interfaces and mixers are similar in that both act as intermediaries when recording, but there are a few key differences.

When it comes to ease of use, an audio interface is easier to use than a mixer. So, if you don’t know much about sound then you may face little difficulties using a mixer. But, it is not rocket science which you can’t cover.

A mixer is more versatile compared to an audio interface. You’ll have more options for sound adjustments with inputs and outputs depending on your needs. So with guests, it’s useful to personalize each one.

There are many audio interfaces and mixers out there that will produce great sound quality when recording. The key is to figure out what your podcasting habits are and how you want to get the audio to your computer.

Audio interfaces are used when you require studio-quality sound by connecting your microphones and other sound instruments if you have any. An audio interface boosts up the sound level so that you’ll get the best output which you can make even better in the post-production process.

A mixer is a great option for more flexibility and versatility. If you’ll be podcasting live and music is also included in your podcast content, then go with a mixer. If you need more control over your recording, and the separate channel and tracks before you start editing, then you should go for a mixer. You’ll save lots of time in post-production.

Finally, it completely depends on you which one you should choose, audio interface or mixer depending on your needs and budget.

Check out the Best Audio Interfaces and Best Mixers for Podcasting articles to learn more about specific options.

Be sure to also look at the list of things needed for podcasting, along with the How to Start a Podcast step-by-step guide. It took me a long time to write out such an exhaustive list of steps to starting a podcast. I hope that you enjoy it and start podcasting soon! I started on my podcast journey by searching the Internet for how to start a podcast and fell deep down this rabbit hole. I share what I’ve learned and experienced to help others.

podcastpursuit.com is a participant in the Amazon Services LLC Associates Program, and we get a commission on purchases made through our links.
Scroll back to top